One man and two teens were struck by a truck in Ville Platte, Louisiana last week, however the victims who have scrapes, bruises and even staples in their head have been charged with not wearing reflective gear. The driver however is a free man. 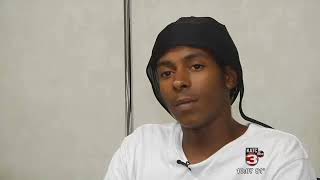 Deonte Williams, 21, 19-year-old Cody Mayes and 17-year-old Tevin Wilson have been charged with obstructing a public passage, which is considered a misdemeanor. The crash happened at about 8PM in an area that doesn’t have sidewalks.

“I just wake up; my cousin [is] telling me, ‘Don’t get up,’ and I was just full of blood,” Williams recounts. “When I wake up, I don’t see nobody with the truck there. I don’t see nothing, but the ambulance leaving with me.”

Authorities say Williams and the two teens were wrong for not wearing bright enough clothing. The city has an ordinance making it mandatory for citizens to wear reflective clothing after dark while walking. Police say the truck driver stayed at the scene and said he didn’t see the trio because he was blinded by the headlights of oncoming cars. However, Williams and the teens say the driver is at fault because most of them were walking in the grass.

“He must have had his lights off and going pretty fast because it hit all three of us,” Williams said

As the three recover, they’re hoping the charges against them will be dropped. “I guess the Lord got to work in his own way,” Williams says.

Police say there were no signs the driver was drinking alcohol.