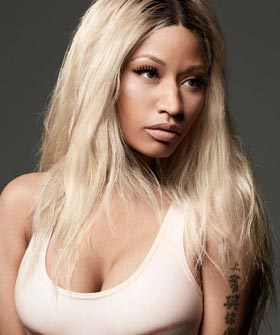 With her monster-selling rap albums and provocative alter egos with wardrobes to match,Nicki Minaj has become a heroine to her millions of followers, aka Barbz. They asked (more than 20,000 questions); she answered (somewhat fewer than that). Don’t miss all of the photos from our August cover shoot with Nicki, then click through her shopping guidewhere you can get her killer cover shoot style for yourself!
Before interviewing Nicki Minaj, one of the reigning queens of social media, ask her to solicit questions from her more than 16 million Twitter followers. Then plop down on a couch with the rapper-actress-songwriter-diva and let those questions rip. Now, inside her trailer on the CBS lot in Los Angeles, the 30-year-old Trinidadian beauty looks amused as I jump right in with a query from @romans_savior. “Will you ever do a video with your real, beautiful hair?” I ask the woman known for her arsenal of outlandish wigs. American Idol, she was fabulous in a tight black-and-white Parker dress and black, faux-fur Givenchy stiletto sandals. Now she’s chilling in a white V-neck T-shirt and brick-colored velour sweatpants, a pair of Hello Kitty slippers at her feet. Next question?
“Yes,” she says with a nod that sends cascades of blonde ringlets (not her own) into motion around her flawless face. Less than an hour before, on the set of
“Do you ever sit back and listen to your albums,” I quote @goddessonika, “and think, Damn, I’m the shit???” Minaj smiles, as if she’s been found out. Her first album, 2010’s Pink Friday, went platinum. Her second, last year’s Pink Friday: Roman Reloaded, sold more than a million copies worldwide. But before that, she’d been making mixtapes and writing lyrics for years. “In regards to that ‘I’m the shit’ question,” she says, enjoying repeating it, “sometimes when I listen to old things I’ll think, How in the hell did I put that together? So, yeah.”

“Ask Nicki about her secret boo,” commands @thedailyarse, while @lesliereloaded is more blunt: “Who is your secret man?” This is the moment when Minaj falls out laughing. When her giggles subside, she talks directly to her fans, whom she calls her Barbz. “Barbz, I officially hate you for doing this to this lady,” she tells them, leaning into my tape recorder. “Dear Barbz: I don’t have a man. And if he were a secret man, why would I reveal him?”

Minaj is relishing this exercise—I can tell by the way her brown eyes flash. So I stay on the topic of love, relaying @krazyyee‘s query about a potential affair between her and the rap-crooner Drake. “Is Dricki going to happen? PLEASE MAKE IT HAPPEN,” I read, using the nickname fans use for the fantasy couple, who feigned romance in the video for Minaj’s song “Moment 4 Life.”
Minaj waves her red shellacked fingernails in the air, delighted. It’s as if I’ve brought her Barbz into the trailer to interrogate her, and she’s loving it. But instead of dishing on Dricki, she turns to me with a warning. “I don’t think you understand what’s about to happen to you,” she says, mischief in her voice. “I’m serious. Watch what’s going to happen when my Barbz see that you’ve asked these questions. I’m just going to tell you right now: You’re going to be their new hero.”

Even before Minaj was famous—before rapper Lil Wayne discovered her and signed her to his Young Money record label, before she became known for her many alter egos (among them Harajuku Barbie, where “Barbz” comes from), before she appeared on her first magazine cover wearing her signature off-the-grid outfits (in her words, some of the “craziest, weirdest, ugliest stuff”)—she knew technology was redefining modern stardom and was determined to harness its power. “With social media, there’s a difference in the fan-artist relationship,” she says. “When someone can hear you speaking through your thoughts and words, they get to make a very quick judgment—quicker than they’d have been able to make in the ’80s or ’90s. They get to feel: Are you real? Is this you? I tell my Barbz, ‘You guys know the difference between rap, play, and dead-ass serious.’ They know the difference between those three Nickis. And they’re so smart. They teach me every day. They’re the meat and potatoes of who Nicki Minaj is.”

Born Onika Tanya Maraj in Trinidad and raised in Queens, New York, Minaj went to Fiorello H. LaGuardia High School of Music and Art and Performing Arts, where she stoked her dream of becoming an actress. “By the time I’m 19, I’m going to be Halle Berry status,” she remembers telling her classmates. “I really believed it,” she says now, “and when it didn’t happen, I started getting more and more crushed.” But she was also a singer, and when she used Myspace to upload some early songs, she developed a following. She changed her name and changed course: She would become a female rapper.
Her theatricality set her apart. She’d first invented those alter egos as a child, when her troubled family life (her father sold her toys to pay for his crack habit) made her yearn for escape. Now they add layers to her persona and give her a flexibility that makes others want to collaborate with her, from Kanye West to Rihanna to Madonna. Still, for all the A-list musicians she’s worked with (she also shared judging duties on Idol with Keith Urban and Mariah Carey, with whom she reportedly clashed), it is her Barbz upon whom she seems to rely for comfort, inspiration, and connection. Whether waking them up (“Good Morning, PrettyGang!!!! Go hard today. Don’t let #uglygang stop u from shining”) or tucking them in (“If you’re under 18 pls take yo ass to bed”) or nattering on in what
reads like a secret code (“Dem chat too bloodclot much. Close uno mout”), Minaj is a master of the 140-character form.

“I’m very aware that millions of people on Twitter have no idea what we’re talking about,” she says of the gobbledygook conversations she carries on with her Barbz. That’s because “we kind of have our own language. I used to think it was just a Queens language or a New York language or an East Coast language, but now it’s a Barb Nation language. I have South African Barbz. Japanese. German. Saudi Arabian. You can be a Barb wherever you live.”
We can all be Barbz, but who will Nicki Minaj turn out to be? The answer is in flux. On the night we meet, veteran Idol judge Randy Jackson has just quit. (Weeks later, Minaj announced she, too, would not return, tweeting: “Thank you, American Idol, for a life-changing experience! Wouldn’t trade it for the world! Time to focus on the Music!!! Mmmuuuaah- hh!!!”) On Idol, she tells me, “I learned so much about myself, like how perception is reality.”

Before Idol, Minaj intentionally hid behind her brightly colored wigs and facades. That was a conscious attempt to “keep up a mystique,” she says, but it often made her seem cartoonish—or worse. Her performance at last year’s Grammys, where she confessed to a priest onstage, then showed a video of her own exorcism, prompted some to label her a poseur, more concerned with attention-getting stunts than hip-hop artistry. But on Idol, people saw a different Minaj. She toned down her look (“I started feeling more comfortable with less”) and proved herself funny, quick-witted, and authentic.
“The perception that people had of me completely changed because there are no cue cards, there’s no script, it wasn’t me performing a song. It was, ‘Let’s see your real personality,'” she says. “My core is a genuine human being who roots for other people. I didn’t want to blow smoke up their ass. I wanted every contestant to leave with something that they could remember.”
Among those who liked what they saw was Nick Cassavetes, the director of the upcoming comedy The Other Woman, who was looking to cast the larger-than-life assistant to a lawyer played by Cameron Diaz. When he offered Minaj the role, she says, “I was like, ‘Why does this guy believe in me?’ He goes, ‘I’ve been watching you on Idol, and you’re great.'” Idol, she says, “made me seem more relatable to the everyday person. It’s cracked that shell for my image. I’ve become something bigger than Nicki Minaj.”
The Barbz have a question about the movie. It comes from @bvdxken: “Are you nervous working with these other big actresses?” Minaj doesn’t hesitate: “I would be lying if I said I was not nervous,” she says. “I can’t blow this.”

I’m struck by how much she admits she has riding on this first movie role. After all, her third album, tentatively titled The Pink Print, will drop next year. Is her real goal to be a full-time actress? “I at least want to do three more albums. If I can do that, I’ll feel complete,” she says. Wait, she might leave the rap world behind? “One day, when I start getting a couple gray hairs, maybe it will all be only acting. I just never know,” she says. For now, she has a lot going on—there’s also a clothing line launching in October at Kmart. “I’ve kind of become the poster child,” she says, “for doing the things that no one expects.”

For the full article, pick up the August issue of Marie Claire when it hits newsstands on July 16.

Angela Basset Is Happy About Her Twins

Do The Celebrities Care About Trayvon Martin?

Beautiful Black Women Of All Shapes, Shades and Sizes