Hulk and Superman movie is overdo

by Gossip
in Blog, Entertainment, Opinion
0 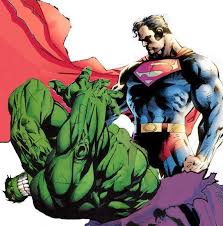 Hulk and Superman movie is overdo. This should have been planned years ago. But there is a problem that exists. Walt Disney, who now owns Marvel Comic Books would never agree to let the Hulk lose. And not surprisingly, DC Comics would never allow The Man Of Steel, Superman, to lose.
There is good reason and logic behind this process of thought. If one of the Comic Books let the competition win, there is a chance that people will no longer be fans of the loser. Everyone likes to go with the winner.
How do they resolve this and still do a great movie? No one has to lose. Think about it. Superman catches the Hulk off guard and pulls a fast punch and some x-ray work. Later in the movie, while Superman is trying to help his friend, David Banner, control the raging monster, he Hulks out and tosses Superman through a building. The only time they fight is win David Banner loses all control and Superman and The Hulk tussle and no one wins. What I guarantee both comic book companies is that this would be the most watched super hero movie of all time, that grandparents take their grandchildren to see. Everyone has wanted to see the Hulk fight Superman since both characters were created. It’s a new millennium. Let’s give it a try.
I think both comic book companies should arrange a plan they both somehow work out budget and script, get it approved, and The Incredible Hulk verses Superman would be the most watched Superhero movie ever. And both companies would sell comic through the roof. 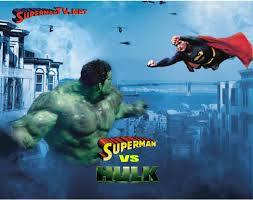 Get it together Marvel and DC Comics. We want to see The Hulk Verses Superman and a good fight in the movie before David Banner puts his back sack over his shoulders and hitch hikes a ride to someplace mysterious. 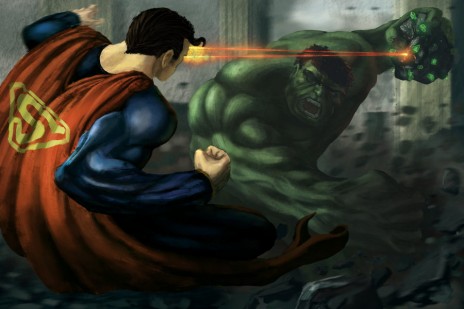