Paula Deen | She Is Ruined – And She Deserves It

Paula Deen Is Ruined | Keeps Getting Dropped By Everyone

Peter Kramer/NBC
Paula Deen cooking on the “Today” show earlier this year.
Paula Deen, the self-proclaimed queen of Southern cooking and a sugary mainstay of the Food Network, was dropped by the network on Friday, after a bewildering day in which she failed to show up for an interview on the “Today” show and then in two online videos begged her family and audience to forgive her for using racist language.

Paula Deen on Race in 2012 TimesTalk

Paula Deen issued an apology on a YouTube video on Friday.But No one cares. 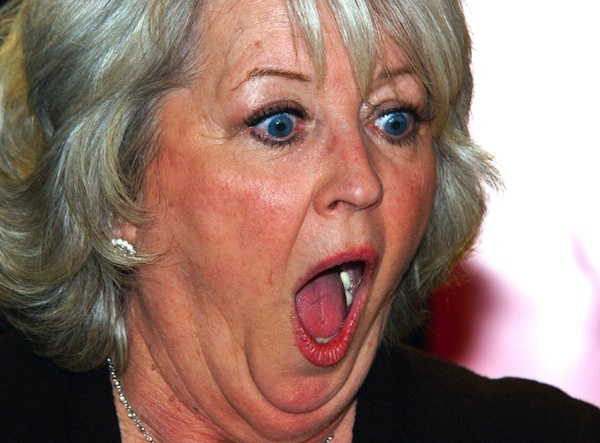 A network spokeswoman said it would not renew Ms. Deen’s contract when it expired at the end of June. Ms. Deen has faced a volley of criticism this week over her remarks in a deposition for a discrimination lawsuit by a former white employee. In the document, she admitted she had used racial epithets, tolerated racist jokes and condoned pornography in the workplace.
The Food Network statement did not elaborate on its reasons for dropping her, but a person close to the network said its shows featuring her sons, Jamie and Bobby, would not be affected. Ms. Deen currently has three regular programs on the network, including “Paula’s Best Dishes.”
Those shows were part of a small culinary business empire run by Ms. Deen, 66, who has produced numerous cookbooks, lent her name to household products from butter to mattresses, and served as a spokeswoman for Philadelphia Cream Cheese and Smithfield Foods. She and her sons own and operate The Lady and Sons restaurant in Savannah, Ga. Her magazine “Cooking with Paula Deen,” has a circulation of nearly one million, her Web site says.
In her first video on Friday, posted on YouTube and later removed, Ms. Deen, near tears, said: “I want to apologize to everybody for the wrong that I’ve done. I want to learn and grow from this. Inappropriate and hurtful language is totally, totally unacceptable.”
In a longer video posted later in the afternoon, she appeared more composed. “Your color of your skin, your religion, your sexual preference does not matter,” she said.
She added: “I was wrong, yes, I’ve worked hard, and I have made mistakes, but that is no excuse and I offer my sincere apology to those that I have hurt, and I hope that you forgive me because this comes from the deepest part of my heart.”
In yet a third video on YouTube, posted Friday afternoon, Ms. Deen apologized to Matt Lauer, the host of “Today,” for not appearing for a scheduled exclusive interview earlier in the day. She had agreed to the interview, extensively promoted by NBC News, to address the uproar generated by her deposition.
Clearly irritated by the absence of Ms. Deen, a regular guest on the show, Mr. Lauer told viewers that she had spoken with him on Thursday, agreed to an “open and candid” discussion and had flown to New York City. But in the morning, he said, she had her representatives cancel, citing exhaustion.
Ms. Deen has managed to offend even her most uncritical fans before, most recently in January 2012 when she announced she had Type 2 diabetes on the same day she endorsed the diabetes drug Victoza and a lucrative collaboration with Novo Nordisk, the drug’s manufacturer. Because she had built her career on a no-holds-barred approach to sugar and fat (creating recipes like a cheeseburger patty sandwiched between two doughnuts and a Better than Sex cake made with cake mix, pudding mix, and heavy cream), she was roundly criticized for encouraging an unhealthy diet for others, hiding her illness and then trying to profit from it.
On Thursday, criticism of her racial remarks mounted on Twitter — even spawning a sarcastic hashtag, #paulasbestdishes — and on Ms. Deen’s own Facebook page.
The lawsuit against her was filed in March 2012 by Lisa T. Jackson, the general manager of Uncle Bubba’s Oyster House, a restaurant that Ms. Deen owned with her brother, Earl (Bubba) Hiers. Ms. Jackson, who is white, said that her father was Sicilian, with dark skin, and that she had suffered prejudice as a result.
In the deposition, Ms. Deen said that she had used a racial slur in the past, though not in the restaurant, but that she and her family did not tolerate prejudice. “Bubba and I, neither one of us, care what the color of your skin is” or what gender a person is, she said. “It’s what’s in your heart and in your head that matters to us.”
She also stated that “most jokes” are about Jews, gay people, black people and “rednecks.”
“I can’t, myself, determine what offends another person,” she said.
Tags: Celeb-Gossip